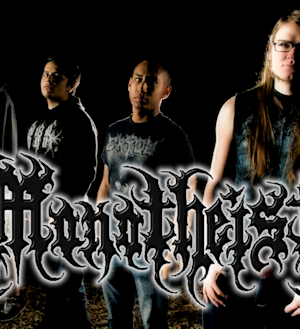 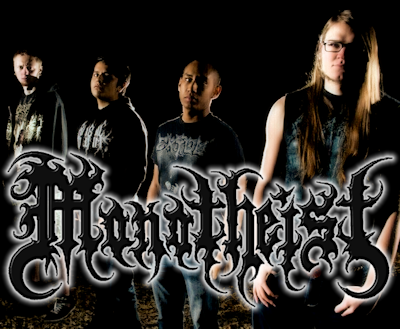 The first time I heard about Monotheist was on Christian Metal Fellowship Compilation Vol. II. but you were around a few years before that. Could you tell us about the band?

Sure. Monotheist started around 2004 as a solo project of mine. It expanded into an actual band around 2007, which is when we recorded our first album, Unforsaken. We played only a handful of shows and then went on hiatus because our drummer at the time had to leave. Unfortunately, that hiatus lasted much longer than we anticipated, about 4 years! This was a result of not being able to find a drummer. But we were able to find a new drummer in the form of Cooper Bates, which helped revitalize the band. This led to use finally recording a new release made up of some of the songs I wrote during our break. The new EP comes out in May and is called Genesis of Perdition.

I would describe your music as Progressive/Death Metal would that be fair description? Who are your major influences?

Me I tend to describe our sound as “Progressive Extreme Metal” because I feel our sound encompasses more than just death metal. There are influences of black metal and thrash as well. As far as musicians and bands that influence our sound, I would say the big ones are bands like Death, Extol, Cynic, Suffocation, Immolation and Emperor. But I’m also influenced a lot by classical music and jazz as well.

What has been your biggest challenge as a band? Have you been able to overcome that challenge? If so, how?

The biggest challenge we’ve had to face is being consistent as a band. Life happens and sometimes people can’t commit to the band as much as they’d like to. Finding people to play this kind of music is also very difficult, especially where we live. Orlando isn’t a hot bed of metal like the type we play. So it’s been slim pickings for us thus far but we’ve been blessed to finally be able to play out again. It’s been a lot of fun. Hopefully things will continue to move forward.

You put out “Unforsaken” with Jeremy Thurmond at Shigionoth how did the cd do for you guys? By the way, I play a few songs on Metal Pulse Radio. A real solid album!

Thanks, I’m glad you dig that album. I think Shigionoth did a great job with reissuing this record. Originally, the album had been self-released in 2007 but Shigionoth did all-new, killer artwork and a remastering job, so it sounds better. We’re thankful to them for that. 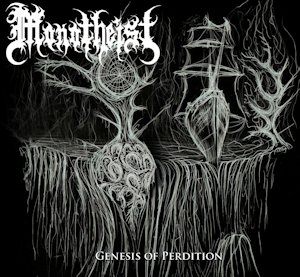 I see you recently released a new EP called “Genesis of Perdition”, How is that going for you guys?

The EP was released on May 21. This is our first release of new music in 6 years and we’re really excited for people to hear it. It’s also our first release with an actual drummer, which is nice; it definitely adds a much needed human element. The music is more concise than on Unforsaken but it’s also more focused and coherent. Also, the production is a step up from before, so I’m happy about that. It’s not perfect by any stretch of imagination, as I feel it could’ve turned out better than it did but we did the best we could, considering our circumstances at the time. We’ll just keep putting out better and better music, evolving every step of the way. Genesis is the next step up from Unforsaken and whatever we do next will be the next logical step from Genesis.

Are you working with Shigionoth on the new ep? Are you guys signed with a new label?

We are self-releasing this new EP but Shigionoth helped with preorder bundles and merch. Right now we are not signed to any label. We’re just doing our thing and if the right people express interest, we’ll see what happens.

Were there any obstacles in getting this EP produced? Could you briefly describe the music making process?

Money! If you don’t come from it, then it’s not the easiest thing to get. But we were blessed to have some wonderful people help fund the recording through a crowd funding campaign. It helped us with recording the drums at a studio, while I would handle recording of everything else at my home studio to keep costs down. I also had to mix the whole thing myself which, if it has taught me anything, it’s that I’ll leave that kind of stuff to the guys who get paid to do it. I’d rather focus on writing and playing the music, not frying my brain trying to get mixes right. It was a stressful situation but I think, all things considered, the end product was worth the work put into it.

As for how the music was made, like in the past, I wrote all of the music and lyrics, except for the song “Subzero” which has lyrics written by our vocalist Shiv. Since we have more people in the band now, expect new music to be more of a collaborative effort.

How do you share your faith with your fans?

I can only speak for myself since not everyone in the band is religious. But I try to live my faith as much as possible in my life, to show love and compassion to others like Jesus asks us to do. I’m not perfect but I try to do the best I can.

Where can we pick this new EP up at?

Digital copies of the album can be ordered through our band camp (http://monotheist.band camp.com) and if you want physical CD’s, you can go to http://www.metalhelm.com and get it from there, along with some really cool merch! Of course, you can also come to our shows to get the new EP!

I love the music Bro!! Keep up the great work for God! Any last words?

Thanks a lot Dale. We really appreciate your support.
And thanks to all the fans out there that support us and the music. It means a lot. God bless!