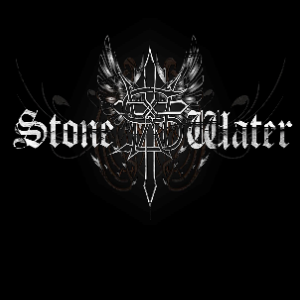 How did Stone Water form?
Well, the history and development of Stone Water probably begins in the summer of 2003. We were a few musically illiterate kids with a wild, crazy idea that we would start a band. We got ourselves a few cheap guitars, second hand drum set, and a borrowed bass guitar, and set out on what would one day become Stone Water. We were learning songs by Nirvana, Lynard Skynard, Green Day, Three Doors Down, Creed, and other rock/grunge bands which was our goal in the beginning. We never realized how awful we sounded, fortunately, for our family it didn’t last long. However, brothers, Cody (guitarist) and Levi (drummer) didn’t give up on the music dream. Every opportunity that presented itself, we drug our instruments out of storage because we weren’t allowed to keep it in our house, set it up on our front porch, and terrorize the neighborhood. Our mom came out one evening with a picture drown by Cody. In the drawing, there are three nails lying in a puddle of blood, a crown of thorns, with “I Hang with Jesus, Because He Hung for Me.” Mom asked that we take this idea, and write a song to go with the music we were playing. It seemed a bit farfetched, but we did it anyway. So, there you have it! Our very first original, “I Hang with Jesus.”

Years past, and the songs kept coming. God truly blessed us with the gift of songwriting, and what was previously meaningless noise, became a joyful noise. For once what we were doing had a meaning and a purpose that far exceeded our original dreams of being a secular rock band. Although God had given us such talents and gifts, we had no venue. We had a message, with no place to share or ear to minister to. Not to boast in ourselves, but only in God. We knew our gift was not for our ears only, but for the world. We just didn’t know how we would do so.

After a number of years, our Dad began a new work in Smithdale, MS as a first time pastor of a nondenominational church, “The Inhabitants of the Rock Church.” He purchased and began a total restoration on an old church building. We were there every step of the way. After finally completing the church, our fist service was held August 16, 2008, and for the fist time, Stone Water performed before a small crowd of people, and the anointing of God filled the building, as if to say, “This is my perfect will for you.” We, as a band, consider this day to be the beginning of Stone Water. Still only two members, God would add to and take away in the years to come.

Stone Water, what’s the origin of that name?
While working on the restoration of the church, prior to our fist service, we decided our two-man-band needed a name. To be completely honest, it was completely random and had no Biblical influence whatsoever. Stone Water it was. Later we made the biblical connection through Exodus 17:6.
Stone Water has always been the band name. We liked it, and it makes for some really cool looking merch.

What genre of music do you consider your work to be? Who are some of your major influences?
We are a Christian Rock band. Some of our biggest influences are, David and the Giants, Third Day, Disciple, Red, December Radio, Skillet, Kutless, Thousand Foot Krutch, Casting Crowns, Sidewalk Prophets, Tod Agnew, Decyfer Down, and many others.
We are mostly original having been blessed with over 20 original songs. We currently cover 3 praise songs in our set. It brings something familiar to the crowd, and usually eases the audience into a comfortable spot to worship. 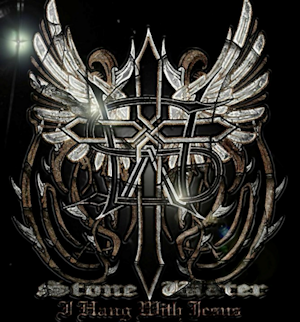 Can you tell us about the new album “I Hang with Jesus”?
The album, “I Hang with Jesus”, obviously named after our first song, is our first album. It is a ten song collection of all Stone Water original material. “I Hang with Jesus” was released June 16, 2012. Songs on this album are: Welcome Home, What’s Good for You, Spiritual Suicide, Have You Ever Had a Friend, Save Me, Breaking the Silence, I Hang with Jesus, The Way a Father Loves His Son, Second Chance, and Away.

Where have you performed? What are your favorite and least favorite venues? Do you have any upcoming shows?
We have performed anywhere from birthday parties, to huge churches and auditoriums. Our favorite venues, without a doubt, is to play in the four walls of a church. The atmosphere in a church is set for praise and the focus is on God. It is easier to get in the hearts of the audience, and gives us a chance to minister the word of God, not just play music. Our least favorite venue is outdoor events and festivals. We tend to lose the crowd to the surrounding fun and activities. Nevertheless, we jump at the opportunity. We do not perform at bars or any place alcohol is served, We have been looked down on for this decision, but stand strong on Romans 14:16. “Let not then your good evil be spoken of.” A bar room would leave plenty of room for lies and rumors to destroy our witness.
We have currently performed in Mississippi, Tennessee, and Louisiana.
Upcoming shows are June 8, at Zion Hill Baptist church in Liberty, MS and September 21 at a water park in Tylertown, MS.
That leaves a pretty big gap, or should we say, a window of opportunity. We are always looking for a booking, and the best part is, we play for free. We travel with a full set of stage equipment, sound, and lighting. We don’t feel justified charging for what we do, it is our ministry, not our job. Maybe one day we will do this full time, but we know God will provide. Love offerings are more than what we could ask for, but if we are required to travel extremely long distances, we may require some expenses to be covered, such as travel and lodging.

What has been your biggest challenge as a band? Have you been able to overcome that challenge? If so, how?
Our biggest challenge as a band is simply keeping a full crew of devoted members. Members have come and gone throughout the years, and most have been family in some way or another. Cody and Levi are the founders of Stone Water, and are the only two members who have always been members. At times, they were the only members. It is very disheartening to try to perform a gig with only guitar, drums, and vocals. We managed usually by tracking bass and rhythm, which provides all the same sound quality with only half the stage presence.
As of right now, we have the most dependable committed crew we have ever had. In June of 2012, exactly one week following our CD release, Cody took Julia’s hand in marriage. Though Julia had been performing a few songs with us prior to marriage, it wasn’t until after they tied the knot that she really filled the position. Believe it or not, keys are an excellent alterative to rhythm guitar.
Our most recent addition to the band is 17 years old Jeff Morgan. Jeff was our one and only responder to our bass audition in September of 2012, but one audition was all we needed. We were completely blown away at the fact that he walked in and played our songs like he had written them.

Where can people hear your music and find out more about Stone Water?
You can pretty much get your hands on the Stone Water album, “I Hang with Jesus”, from almost any website, such as, iTunes, CD Baby, Amazon, ect. Just search “Stone Water, I Hang with Jesus”. You can sample our material absolutely free at www.Facebook.com/StoneWaterBand. We can mail physical copies for those who prefer an actual CD. Also, check us our on YouTube, Twitter, and Instagram, but our absolute favorite way to be heard is alive and in person. No matter what though, listen for us on Metal Pulse Radio.

Any final comments before we head out?
We just want to thank Dale Huffman for all the support. It is truly a blessing to have a friend like him. Always remember to do everything you do to honor and glorify the King of Kings and the Lord of Lords, Jesus Christ.
May God bless you all!