Hey Brian. Thanks for taking time to chat with me. Start us off by telling our readers how the band was formed?
Nostalgia originally formed back in 1992. The guitarist, Don Gilbertson and I met through a band I was in at the time called Last Daze, who was mainly an opener playing with bands that were pretty well known at the time. Eventually, it was looking as if Last Daze was coming to an end and Don and I talked about starting a whole new band with a heavier metal sound. We hooked up with this drummer, Anthony Gomez, and would just jam at this little Foursquare church, seeing what we could come up with. After a few months we really felt like we had something going. So we put an ad out for a bass player and before long we were blessed with Scott Kelly, who was an excellent bassist. Nostalgia was complete and we just started writing some great songs, recording our rehearsals, and just trying to get in on as many gigs as possible.

What’s the origin of the band name and how do the new songs differ from your older material?
The bands name actually came from looking through the Webster’s Dictionary. I really wanted something that had to do with heaven and Nostalgia was the closest thing I could find. One of the definitions is, “A longing for someplace distant”. It sounded cool so we decided to go with it. Even though there are now a few bands with the same name, we are pretty sure we were the first to have it. We obviously never changed the name, even after a 17 year break.

Our newer material is what we like to call old school metal with a new twist. It is just as creative with even more passion and energy. Songs like, “Dust”, “Rekindle The Flame”, and “Raise The Dead”, with a few different transitions throughout. And even some tempo changes here and there kind of creating a musical story. There is no difference with our bold message in every song.

Could you briefly describe the music-making process?
As far as writing goes, we don’t have a certain way of doing it. We all just come up with different ideas and piece them all together. I have a lot of lyrics I’ve written over the years. Don will start messing around with some catchy chords and riffs on the acoustic guitar, and then I will add a melody line that fits. After those steps, we break out the electric guitars and we all build from there: intro, bridge, and outro etc. It’s always exciting to hear a new song come together.

Who or what has influenced your music the most?
We all have a broad range of musical tastes and a passion for writing and playing music in general. I have been around music all of my life. Don spent a lot of time in the bay area back in the 80’s in the rock and metal scene with bands like Blind Illusion, Straight Way, etc. The bands that really inspired me were a lot of the Christian rock and metal bands that I had the opportunity of growing up with, such as Bloodgood, Stryper, Barren Cross, Saint, Sacred Warrior, Guardian, etc.. I still listen to most of them today. I have a lot of favorite vocalist like, Rey Parra, Les Carlson, Mike Lee, Greg X Volz, Lance King, Russell Allen, Bruce Dickinson, just to name a few!

I see you released a new album this past summer 2012. Could you tell us about it?
We are very pleased with the demo CD that we recently released this summer. It consists of 7 rockin’ original songs. 4 classics from back in the day like, “Escape”, and 3 new songs that we are especially excited about. “Dust”, “Rekindle The Flame”, and ‘Raise The Dead”. We were privileged to have our original drummer, Anthony Gomez, help us out with the drums on four of the tracks. It also features Josh Gilbertson on guitars with Don, and GavinXVI 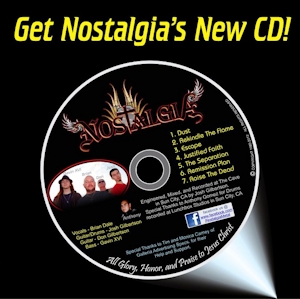 on the bass. It was a long labor of love. It was about a year long process, but worth the wait. The feedback and support with the music has been awesome and by means of Reverbnation and Facebook, it’s being shared all over the world and seeds are being planted. People are really enjoying the tunes and it’s encouraging for us to watch it all unfold. The Lord is doing some great things!

Where can we pickup this cd?
The CD’s are available through ChristianRockShop.com, Roxx Productions, Righteous Rock Show Nation, and can also be downloaded from I Tunes and other major music sites. It will be available on CD Baby very soon. Of course you can purchase them at our shows.

What’s your ultimate direction for your band? Are you seeking fame and fortune?
I would honestly have to say that the ultimate direction for our band is to be obedient to the command that Christ gave us, which is to take His message of hope to the entire world. We know that the sky is the limit when the Lord is in it, so we want to take this as far as He would have it to go. We have a deep desire to be a light in the darkness and be known as a band that not only plays good metal, but a band that does not compromise on-or-off stage. The messages in our songs are and will continue to be bold. We are not ashamed of the gospel. It is the power of God unto salvation for all who will believe. We are not interested in fame and fortune. We simply want to be faithful to the call He has put on our hearts.

What is your definition of Christian music?
I believe our definition of Christian music would be to have a clear message of hope that is not only positive, but more than anything, keeps Christ and what He’s done for us at the forefront. His name must be lifted up and glorified without shame and with boldness. Addressing the critical issues of sin, repentance, the cross, as well as the grace and mercy that God offers. We have the greatest message, and it’s what this lost and dying world needs, so we cannot water it down.

What’s the most bizarre thing to happen while you were onstage?
I would have to say that the most bizarre thing to ever happen while on stage was when we played our first gig after 17 years at “Up From The Ashes 3” in 2010. We were really rockin’ the set and the energy was intense playing the old songs again. We had two songs left and our guitarist Don all of a sudden said that he couldn’t play anymore because he was feeling really sick. So I had to tell everyone that we were finished. Even though it was difficult at the time, looking back we see that it was just one of many obstacles that would come about to refine us and help bring us to where we are today.

Thank you very much for your time Brian. Any final words?
Dale, you have been an awesome encouragement and support for Nostalgia, as well as many other Indie bands out there, sharing our vision, playing our music, and just being a great friend. We would be so grateful to have everyone stand behind this ministry in prayer. We are out on the front lines, walking into the fire, playing venues and festivals where most Christians would not go. We all serve the true and living God together. Different methods, but one purpose. Thank you and God bless!  KEEP IT METAL!!