After 30 yrs and the release of their recent album, Bride calls it quits 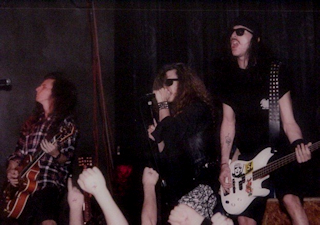 “‘Bride wishes to thank everyone for your support. Since 1985 we have been blessed to create music that speaks to the heart of people. It has been our good pleasure to promote the gospel of Jesus Christ through music. We have released our final CD “Incorruptible” and there will be no tour. We pray that you will keep the memory and music of bride alive in your hearts for years to come. We have left you with a large library of our music. We feel we have produced all we can and Bride is saying goodbye. This is not see you later this is the final curtain. No encores the lights are out Bride has left the building. God Bless You All.”

Bride was formed in Louisville, Kentucky in the early ’80s, by brothers Dale and Troy Thompson. Going by the name Matrix at first, the brothers started writing music and recording demos in 1983. They recorded four demos and started selling them at concerts and through magazines. In 1986, the band opened for the Canadian group, Daniel Band, in Pottstown, Pennsylvania. This performance caught the eye of an agent of Refuge Records. He decided to sign them to their new label oriented to metal music. The band, already consisting of guitarist Steve Osborne, bassistScott Hall, and drummer Stephen Rolland, officially changed its name to Bride and went on to record “Show No Mercy” and “Live to Die” in 1986 and 1988, respectively.

After a change in line-up, they recorded “Silence is Madness” in 1989. With their contract with Refuge about to end, the band released “End of the Age” in 1990, which is a compilation album of hits from their first three albums. Ironically, the album indeed signaled the “end of an age” as the band went on to change their metal roots to a mellower rock sound more attuned to the mainstream rock of the era. With bassist Rick Foley and drummer Jerry McBroomfilling the line-up, and a new record deal with Starsong, the band released “Kinetic Faith” in 1991. The album spawned some hits in commercial radio, and the band continued to focus on that road. In 1992 it was announced that Dale would leave to join Stryper to replace Michael Sweet, but this never took place. They followed it with “Snakes in the Playground” and “Scarecrow Messiah” before releasing yet another compilation called “Shotgun Wedding” and finally parting ways with Starsong in 1995.

That same year, the band decided to sign a one-record deal with a new label called Rugged Records. They also welcomed a new bassist, Steve Curtsinger. The band departed more from its heavy side and went on a completely different route with “Drop” in 1995. “Drop” featured an alternative rock-oriented sound which included banjo and mandolin. Following recommendations of producer and friend John Elefante, the band went on to sign with Organic Records, another up and coming label that was eager to pick them up. In 1997, they released “The Jesus Experience” which continued their alternative style leanings, however, with a slight grunge and post-grunge overtone. The next year, they released “Oddities”. Although intended to be a return to their roots, the album was more of a blend between alternative rock and hard rock.

After some differences with the label, the band asked to be released from its contract. Some time after, McBroom andCurtsinger left to pursue other projects. They were replaced with Lawrence Bishop and Michael Loy. Being picked up by Absolute Records and veering into rapcore territory, the band released “Fistful of Bees” in 2001. The album was quickly disparaged by fans for containing nu metal and rapcore elements. In 2003 the band independently released its latest album called “This Is It”, which marks a return to a more rock-driven sound. It was re-released in 2006 under Retrospective Records, digitally remastered and with a new cover. In 2006, Bride released “Skin for Skin”, which returned to their hard rock sounds akin to earlier Bride albums. It also contained guitar solos from former Bride guitaristSteve Osborne. The album was praised by Bride fans, most prominently Scott Waters of Ultimatum, who said it was “a logical step from ‘This Is It’ and is an honest and successful attempt to progress without worry of what is popular.” The last studio album “Tsar Bomba” came out in 2009.

Bride has received four Dove Awards from the Gospel Music Association. Three were for “Hard Music Song”, in 1992, 1993, and 1994. The fourth was in 1995 in the category “Hard Music Album” for “Scarecrow Messiah”.

However, I consider my life worth nothing to me; my only aim is to finish the race and complete the task the Lord Jesus has given me—the task of testifying to the good news of God’s grace.
Acts 20:24