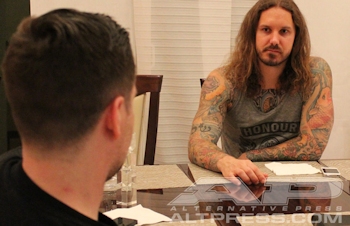 Tim Lambesis speaks about his case for the first (and possibly last) time anywhere, in a series of interviews with AP’s West Coast Editor Ryan J. Downey conducted in the final weeks and days leading up to today’s sentencing of six years imprisonment.

Here are some snippets from the interview:

I was convinced there was no God and therefore there was nothing wrong with absurd things. I trained my mind to work around the issue. “Well, logically, if this makes my life better, than this is what I should do.” I don’t think I’d fall into that moral trap again, even if later in life I examined the evidence and once again decided there’s no God. I’ve been able to see all sides of the arguments more wholly. Even from the perspective of doing whatever’s best for you, there are still consequences for your actions.

We toured with more “Christian bands” who actually aren’t Christians than bands that are. In 12 years of touring with As I Lay Dying, I would say maybe one in 10 Christian bands we toured with were actually Christian bands. I actually wasn’t the first guy in As I Lay Dying to stop being a Christian. In fact, I think I was the third. The two who remained kind of stopped talking about it, and then I’m pretty sure they dropped it, too. We talked about whether to keep taking money from the “Christian market.” We had this bizarrely “noble” thing, like, “Well, we’re not passing along any bad ideas. We’re just singing about real life stuff. Those kids need to hear about real life, because they live in a bubble.”

I remember one Christian festival where an interviewer wanted one of the guys to share his testimony, and he just froze up and let one of the guys who was still a Christian at the time answer the question. We laughed about it afterward, but we were only laughing because it was so awkward. When kids would want to pray with us after shows, I’d be like, “Um, go ahead and pray!” I would just let them pray. I’d say “Amen.” If praying while I have my hand on their shoulder makes them feel better, I didn’t want to take that away from them. When they would specifically ask me to pray for something, I’d say, “I don’t really like to pray out loud, but I’ll take that with me to the bus.”

He has saved us and called us to a holy life—not because of anything we have done but because of his own purpose and grace. This grace was given us in Christ Jesus before the beginning of time.
2 Timothy 1:9