Artwork description: According to the band, the artwork tells the story of the title and lyrical theme of the album — Harmony In Ruins. The ‘Tree of Life (which now appears dead or dying) coming out of the scroll/scripture and reveals the result of ‘the fall’ in the Garden of Eden into modern times, which is depicted by city in ruins across the water.
Artwork design by Promise Land’s very own, David Michael. 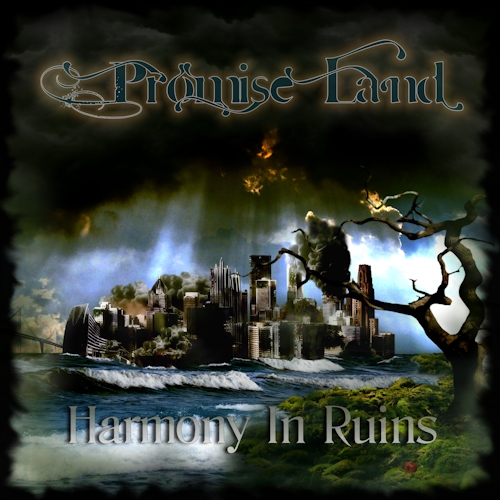 No official release date has been given, but it has been stated for a Spring/Summer 2014 release.

Promise Land’s first EP, simply titled ‘Demo’, was recorded and released in late 2005. Their standout song ‘Christ in us’ (which is also rumored to be re-done on the upcoming album: Track#3 released above – C.I.U.?) was also selected as TOP 10 in the Kingdom Bound International Talent Search.

The band eventually revamped their sound and also made a line-up change, bringing on a second vocalist. To reflect the vocal change/new sound and musical growth, Promise Land quickly released a new single titled, ‘Hiding Place’ in the winter of 2010/2011, which is also stated to have been redone for the new album Harmony In Ruins.
Share

And I myself did not know him, but the one who sent me to baptize with water told me, ‘The man on whom you see the Spirit come down and remain is the one who will baptize with the Holy Spirit.’
John 1:33

For from him and through him and for him are all things. To him be the glory forever! Amen.
Romans 11:36