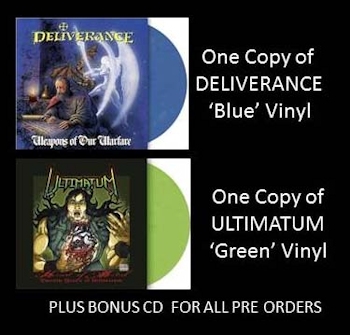 Coming this summer, and being released on vinyl in the US for the very first time, the classic release ‘Weapons of our Warfare’ from Christian thrash masters…. DELIVERANCE! ‘Weapons of our Warfare’ is a landmark thrash album with the title track receiving prominent rotation in the MTV metal show Headbanger’s Ball back in 1990 where it would remain in the top 3 videos for 12 weeks.

The album is being completely re-mastered and the original artwork will be restored exclusively for this vinyl release. This pressing will be limited to only 300 hand numbered copies, 100 on a special Blue vinyl and 200 on traditional black vinyl.

Simultaneously New Mexico thrashers ULTIMATUM will be offering up their classic thrash release ‘Heart of Metal’ in a Limited Edition vinyl format, this also happens to be the bands very first ever vinyl release.

The album will be completely re-mastered just for this vinyl release with the original artwork being reformatted for this very special and one time only vinyl release. This pressing will be limited to only 250 hand numbered copies, 100 on a special fluorescent Green vinyl and 150 on traditional black vinyl.

In addition all pre orders that are placed will also receive a limited edition CD of these newly re-mastered tracks.

The lips of fools bring them strife, and their mouths invite a beating.
Proverbs 18:6