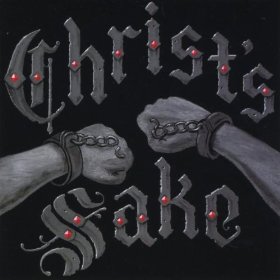 June 25, 2013 –  Christ’s Sake officially joins the Thumper Punk Records family of bands, and re-releases its debut album “Christ’s Sake” in advance of their upcoming second album later this year.  Christ’s Sake delivers their classic Orange County old school punk sound with melodic hooks and driving rhythms, which are contrasted uniquely harmonic vocal arrangements. Band members include founding member Lance Hendren (guitar, vocals), Vince Morales (drums), Matt Kilian (lead guitar), Dillon Hendren (backup vocals), Sandra Calvillo (backup vocals), and former member Zach Rogers on (bass guitar). The band was formed by formed by singer songwriter guitarist Lance Hendren, who is also founding member of Huntington Beach punk veterans OCA.  He acquired the drummer of OCA, Vince Morales to play drums for Christ’s Sake after he had written a few songs for the new project. They were joined by Lance’s son Dillon, then Sandra, then Matt Kilian who plays a fierce lead adding a dynamic that stands on its own. Original bass player Zach Rogers has since departed the band moving to Texas, but new bass player Matt Vangalapudi has since joined the band with a smooth transition. The band writes about life’s pains and what God has done for them and can do for you too. Whatever it may be either from drugs, alcohol, abuse, emptiness or loneliness, Jesus is there for you.

Seek good, not evil, that you may live. Then the Lord God Almighty will be with you, just as you say he is.
Amos 5:14