Deliverance: Hear What I Say . 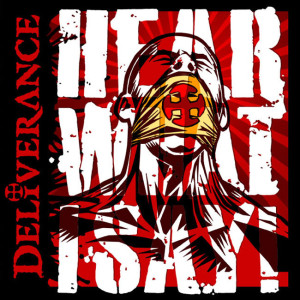 THE WAIT IS OVER!!! Deliverance’s final album entitled Hear What I Say! will be released officially on December 10th, 2013.
Hear What I Say! has been one of the most talked about and anticipated thrash metal albums of 2013.

Fan reaction all over the internet has grown to a fever pitch in anticipation. This last outing from Jimmy Brown and Deliverance features a who’s who of the underground thrash metal scene! Check out this stellar line up and album sampler [sampler video below]…

This lineup nails it and delivers what is destined to become a Metal classic and it makes an excellent swan song for the Mighty ‘D’! The new album features 10 blistering tracks:

There you have it, the album the world has been waiting for the 10th and FINAL long awaited album from Deliverance! And also a special treat for our German fans with the very first ever German language track from Jimmy Brown and Deliverance.

As an additional bonus the first 200 copies will also feature a Limited Edition poster that will be hand numbered and signed by Deliverance front man and founder, Jimmy Brown. But get those orders in quick, there will only be 100 available from 3 Frogz Records and 100 from Roxx Records!


Deliverance ‘Hear What I Say!’ Sampler

You make your saving help my shield, and your right hand sustains me; your help has made me great. You provide a broad path for my feet, so that my ankles do not give way.
Psalm 18:35-36

Make sure that nobody pays back wrong for wrong, but always strive to do what is good for each other and for everyone else.
1 Thessalonians 5:15