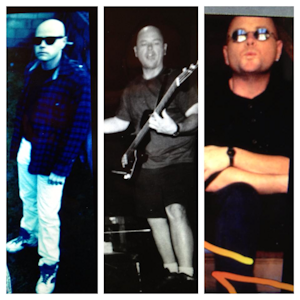 “It is with sad & heavy hearts that we share the news of Paul Valadez passing away last night. Paul was a founding member of Adam Again, incredible bass player, one of the sweetest, kindest souls one could ever meet, he was in the band Martus with Gene and Greg that eventually became Adam Again. He is survived by his lovely wife Roxann. Our prayers and thoughts go out to Paul’s family and friends. The earth is hard, the treasure fine.”

Gene Eugene’s mystical voice—often mistaken for R.E.M.’s Michael Stipe—remained the least-changing element in a band that Thom Jurek of allmusic has described as “inventive and artfully canny.” Adam Again’s style was rock and acoustic with strong hints of funk and traces of soul running throughout. The band never achieved commercial viability, however, and quit touring and recording together in 2000 after Eugene died in his recording studio, the “fabulous” Green Room.

In God, whose word I praise— in God I trust and am not afraid. What can mere mortals do to me?
Psalm 56:4

Wealth is worthless in the day of wrath, but righteousness delivers from death.
Proverbs 11:4