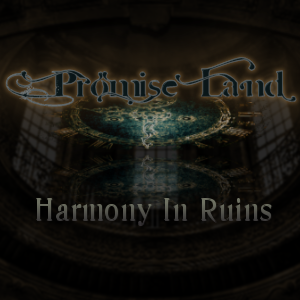 In addition, via the teaser-video, the Official album-title has also been made public. The official title is: Harmony In Ruins.

According to the XNilo Website, this is “..the first teaser-video of more to come as we draw closer to the release.”

There has been no official release date announced yet, but the band has assured fans that the release is, “on the horizon”.

Promise Land is a Christian symphonic metal band hailing from Pittsburgh, PA. Their first EP simply titled ‘Demo’ was recorded and released in late 2005.The EP was selected as “Album of the Moment” for several weeks running on major Christian Metal/Rock websites, as well as remaining #11 on the “Best Rated Albums” on the largest online Christian Metal Music Vault. Their song ‘Christ in us” (which is also rumored to be re-done on the upcoming album) was also selected as TOP 10 in the Kingdom Bound International Talent Search.

The band eventually revamped their sound and also made a line-up change, bringing on a second vocalist. To reflect the vocal change/new sound and musical growth, Promise Land quickly released a new single titled, ‘Hiding Place’ in November of 2010. This song is based on the true story of Corrie tenBoom, a modern day hero of faith, based on her and her families action during WWII, specifically in hiding the Jews and facing imprisonment as a result, in holocaust camps.
Share