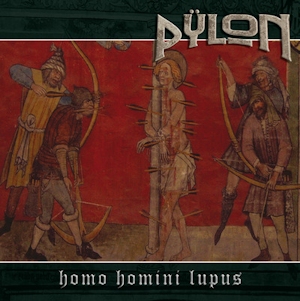 Swiss doom metallers Pÿlon are set to release their sixth full-length album – Homo Homini Lupus – on June 3, 2014 through U.S. label Roxx Records. The CD will contain six original compositions, including a track, “Al-Hahar”, with a verse in Modern Hebrew, and one cover song which is set to be a brand new re-imagining of a classic metal tune from Slayer entitled “South of Heaven” which will also feature a very special guest appearance from Tim Gaines of Stryper playing bass.

Pÿlon have also recruited the vocal talents of Jordan Cutajar of Nomad Son to handle all of the vocal duties on this brand new effort. Matt Brand will continue to handle all guitars along with the talents of Oliver Schneider (Minsk Security). Rounding out this highly anticipated release will be Reto Hardmeier (Punish, Aliengate) on bass and Beni Mayer on drums.

Pÿlon’s fifth album, The Harrowing Of Hell, was released in 2012 on vinyl and in 2013 on CD as a collaborative effort between Roxx Records and Quam Libet Records. The effort contained six original compositions, including “Returnal Etern” and “Psalm 139b” as well as a re-imagining of Black Sabbath’s “Paranoid”.

To do what is right and just is more acceptable to the Lord than sacrifice.
Proverbs 21:3

Those who are in the realm of the flesh cannot please God.
Romans 8:8