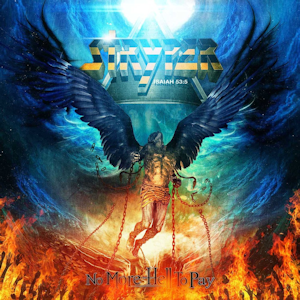 This Official lyric video is a new single titled, ‘Revelation’ from their upcoming album release “No More Hell To Pay” [Scroll down to view video]

No More Hell to Pay is Stryper’s eighth original studio album. Produced by frontman/guitarist Michael Sweet, the set features some of Stryper’s strongest and heaviest material yet. Sweet commented: “The new Stryper album, No More Hell To Pay, is the record we needed to make as a follow up to To Hell With The Devil. Every song has a hooky guitar riff. Everything is in minor keys, so it’s a little darker sounding and a little tougher. It’s definitely our heaviest record and I think people will be pleasantly surprised. To reference, there is less songs like ‘Calling On You’ and more songs like ‘To Hell With The Devil’. It’s more in that vein than the poppier vein.”

Stryper is considered one of the top Christian rock bands of all time. Comprised of the original line-up of Michael Sweet (vocals/guitar), Oz Fox (guitar), Tim Gaines (bass), and Robert Sweet (drums), Stryper has been on the scene since 1984, and is responsible for such classic metal albums as SOLDIERS UNDER COMMAND, TO HELL WITH THE DEVIL, IN GOD WE TRUST and AGAINST THE LAW and hit radio and MTV singles like “Calling on You,” “Free,” and “Honestly.” (Stryper was the first band to have two songs in MTV’s Top 10 simultaneously.) After a sabbatical for much of the 1990’s, Stryper returned strong in the early 21st century and now they continue with their most recent upcoming release, NO MORE HELL TO PAY. To date, Stryper has sold upwards of 8 million records worldwide and is a Dove Award-winner and Grammy nominee.

Stryper is set to release their new full-length album, “No More Hell To Pay” in November 2013. First in Europe, November 1st, and then in North America, November 5th.

What you have said in the dark will be heard in the daylight, and what you have whispered in the ear in the inner rooms will be proclaimed from the roofs.
Luke 12:3

Do not say, “Why were the old days better than these?” For it is not wise to ask such questions.
Ecclesiastes 7:10