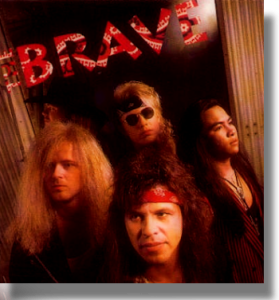 “THE RETURN OF THE BRAVE–coming soon….the first new release since 1994, with 7 new takes on some Brave classics, and 5 new tunes that you’ll be singing along to throughout 2013/2014!!! Getting close to the mixing stage. Stay tuned….”

The Brave came onto the music scene in 1991, releasing 2 successful CDs with Pakaderm/Word records under the high production standards of John and Dino Elefante. The first, Battlecries, was met with critical success and yielded over 6 top ten CCM singles, including All Together Now, The Waiting, Just a Man and If That Ain’t Love. The lineup consisted of Stayce Roberts and Freddy Tierra on dual guitars, Randy Roberts on drums, Malcolm Paris on bass and James Salters on vocals. The Brave produced a huge arena rock sound, laden with fiery guitars that were rich in melody and attitude, Def Leppard type harmonies, thundering drums and bass, all glued together with the Lou Gramm/Klaus Meine inspired vocals of James Salters. Battle Cries was mixed by none other than Neil Kernon(the mastermind behind Queensryche’s Operation Mindcrime and Dokken’s Under Lock and Key), and together The Brave became a crowd and radio favorite, touring over 32 states in 3 months in support of an album that has garnered fans the world over, even after 20 years since its release.

Sadly, The Brave lost singer/drummer Randy Roberts in 2007. In tribute to their fallen brother, remaining members put on a concert in his name, and certainly, his presence was felt.
And now, almost 20 years later, there is a rumble on the horizon. The Brave is set to return in 2013 with new spins on Brave classics, and a few new surprises. Pre-production on the new Brave record are under way, and the stage is set. Lead

Guitarist Stayce Roberts states, “Yes, we are back! I think the new record will be an amalgamation of everything our Brave fan base dug us for– melody, shredding and great songs.”

For if you forgive other people when they sin against you, your heavenly Father will also forgive you.
Matthew 6:14