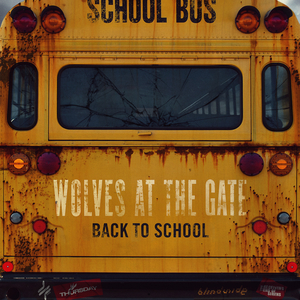 The Following is an Official Press Statement from Solid State Records.
_______

Wolves At The Gate to release “Back To School”, a digital EP, set to drop on Sept. 30th. The EP sees Wolves paying homage and “schooling” a new generation on keystone bands such as Thrice, Thursday, Blindside and The Receiving End of Sirens with their own take on these fan-favorite tracks.

In addition to Back To School, WATG will make sure fans are ready for the fall with an appearance on the Rise Up tour – a monthlong, 28-city run – supporting A SKYLIT DRIVE alongside I THE MIGHTY, FOR ALL THOSE SLEEPING and PVRIS.

Check out all the Rise Up Tour dates here!

Named one of Alternative Press’s “100 Bands To Know” in 2012, WOLVES AT THE GATE have been relentlessly touring in support of their debut full-length, Captors. Released in 2012, Captors sees the band not only living up to but surpassing the huge potential recognized early on by critics and fans alike with explosive songwriting that careens from brooding melodic hard rock to unabashedly heavy hardcore stomps.
Share

My salvation and my honor depend on God; he is my mighty rock, my refuge.
Psalm 62:7

Let your gentleness be evident to all. The Lord is near.
Philippians 4:5