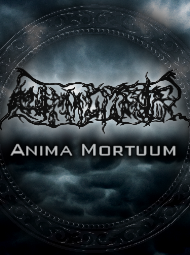 Welcome, Zvi. Let me start by asking: Why are you doing Christian Unblack metal? What does it mean to you?
Hi Dale, thanks for this interview. About Christian Black Metal, I write this music style because I’m a fan of Black Metal. I used to listen to many Black Metal bands (most of them satanic and anti-christian), and when I decided to make music I decided to focus on lyrics that were is in my heart. All bands, in the world, write and sing according to their hearts. I gave my life to Christ, so my lyrics and music are inspired by that fact.

The name “Unblack Metal” or “Christian Black Metal” means nothing to me. Many Christian bands only take the title ‘Christianity’ to express their aggression, they filter their hate with messages of condemnation, using the Bible as an excuse to justify their aggressive trend of judging. My concern is the lyrics, not what bands claims to be. I name my style “Unblack Metal” just to be in consensus with people, but the style itself doesn’t mean something important to me.

Does Chile have an Unblack metal following?
Not too much, as an example, in my city (Arica) I only know one person that is a Christian and listens to Unblack Metal. I know that there are others but I don’t know them personally… In Chile the scene is poor, and as a result there are very few active bands apart from me (as example: Autem Gnosis/Ritual Nox and Almagor)

What inspired you to branch away from your main band (Diamoth) to record a solo album?
I usually work alone, it’s easier for me because I make things just the way I like it. The other reason why I work as a soloist is for the lack of people who wants to be involved in a Christian band (in my area). I hope that in a near future I can find a drummer who wants to walk with me in my projects.


Are you still a part of Diamoth?
Yes, I still lead Diamoth, but at this moment the band is on stand-by because we having some problems in the recording process. We have a full-length album in process, and you can listen to the single “Retroactive” from the upcoming album at: http://diamoth.bandcamp.com. For now I’m concentrating on my other projects (Anima Mortuum and Black Leather).

I see you are with Shattered Chain Records. How did this come about? How is it working out with the label?
Well, when I finished the album “The Return” I was looking for a Christian label, so I sent few emails out to record labels. I had 3 labels interested in the album but I felt that working with Shattered Chain Records was the way that God wanted me to go. The label is a 10, good persons surrendered completely to the God’s work, I’m very pleased to work with them. So, I hope to work with them more in the future.

Can you tell us what to expect from “The Return”? Has a date been set for the new release?
Well, it’s hard to say. ‘The Return’ accomplished all my expectations as a black metal album. It has deep melodies, several rhythmic changes, sounds crude and occasionally melodic. The recording is raw but, according to the equalization, sounds pretty good. I think that fans of the old-school Black Metal will be pleased with this recording, especially fans of bands like Horde, Sanctifica and Hortor .I think future Anima Mortuum albums will continue the line of classic Black Metal.

The release date for Anima Mortuum: ‘The Return’ is July 15th.

Could you tell us how was the recording process? Did you record in a home studio or a professional one?
I recorded this album in my own studio (Digital Chord Studio), which is just something basic that I set in my house to record my own stuff. First, it’s important to mention that in 2013 I’ve now had 10 years in the Christian metal scene as a musician, and to celebrate that fact I decided to revive my first band “Anima Di Morte” with a new name “Anima Mortuum”. “The Return” has 4 of the original Anima Di Morte songs on this album and the rest are new songs created for the occasion. I started to create and record this album in 2012 and the motivation to record this album was the anniversary. In this album I wanted to bring the energy of all my projects because this is where it all started, for this reason this album is very important to me. It was quite emotive during the process of recording, remembering those old times with the friends who formed the band, that’s why the meaning of this album is very intense for me.

What is a normal day for you when you’re not doing Anima Mortumm or Diamoth?
When I’m not in Anima Mortuum or Diamoth I’m in Black Leather, haha… No, I’m a husband of a beautiful wife, father of two beautiful girls and Monday through Friday I’m working in a rehabilitation center of drug and alcohol, I’m a licensed psychologist. I attend church every Sunday with my family and seeking how to serve and obey God in my daily life. Music is just the little big part in my life.

I noticed from your facebook that you seem like a proud dad.. How does your family receive your music? Does your wife support your projects?
Well, my wife doesn’t like Metal, so in the beginning she didn’t understand why I sing Christian lyrics with those dirty and noisy sounds, between shouting and grunting. With time she understands that the focus of this evangelistic work is not for the common Christian who likes calm and romantic music The focus is for those that are uncomfortable in common churches because they are discriminated for the way of dress or musical trend they like. Also the focus is the common Metal-head, the way to get to their heart is through music. The common Metal-head will usually fill their mind with lyrics about destruction, humiliation, arrogance, immorality, self-destructive tendency, feelings of emptiness, hopelessness, lack of control, addictions, death, anger, promoting impulsive aggressions, deceit, pain and throw their life to an eternal death in hell.

They need to listen to other things, they need to listen what God has for them, they need to find love in the music they like. I’m completely against promoting ideas that threaten the physical, mental, emotional and spiritual life. My position is based according to my professional orientation but, also, it is based on what the Bible teaches us about ourselves, and the last reason is the base for the first.

I think I went a little far from your initial question, but yes, my family supports what I do. In fact, my oldest daughter wants to sing like me. Sometimes I make music when they are playing with their toys in the recording room, and sometimes, after finishing a song, you can hear their little voices in the background… That makes me have to record everything again… Haha, but I enjoy it.

I would like to thank you for taking the time to do this interview and I pray that God uses this album. Is there anything else you would like to share?
Thanks to you! And yes, I want to share something with the people who read this:

I want to share 1 John 1:8 “If we claim to be without sin, we deceive ourselves and the truth is not in us”. Christian people need to fall on their knees and recognize that we are sinners and we need to be washed by the Holiness of God every day. “If we confess our sins, God is faithful and will forgive us and purify us from all unrighteousness” (1 John 1:9).

We must care for ourselves, for what we do, these acts have an effect on the people around us. Our own sins often have an effect in our family, despite if our family is aware of our sins or not. We must confess our sins, we must declare them and put them at the foot of the Cross. Confesses your sins with your wife, your brother, your pastor, because two persons praying are more powerful than one.

God bless you all, and the peace of God be with you.