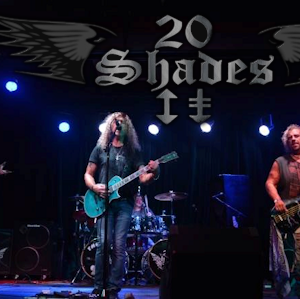 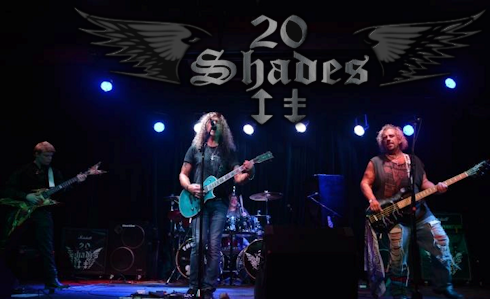 Can you provide a brief history of the band and how it was formed?
(Davey ) – James contacted me about doing some work on an original project when I lived in Florida. . . and I am usually skeptical about original music. . . but when he popped a demo in of a few of his tunes. . . I was IMMEDIATELY blown away . . . I told him “ok, what time do you want me at the studio”. . . . and we started working together from that point onward

What inspired you to make music together?

( James ) I started writing songs again after a short break as a solo artist. It was 2010 , when I started to recruit band members for 20 Shades. I would record tracks and arrange them, and bring them to the band. The band would rehearse and collaborate with me to finalize songs.

(Davey) – Just the energy that came through in the material. . . the lyrics are so powerful and the energy that the music spins is amazing. . . working with James is a TOTAL inspiration . .

20 Shades is an interesting name. What’s the origin of that name?
( James ) The name came from one of the songs “20 Shades of grey” We used 20 Shades as the name of the band. The song meaning ” coming from the darkness into the light… the many shades of grey between dark and light.

(Davey) – yeah James is right. . . we kicked around a lot of names, but that one really stuck with us

For someone that has never heard your music how would you define your music style?
( James ) It is hard to say… people say we sound like a lot of different bands. We have a VERY original sound that is rooted in bone crunching guitar, deep thumping bass and vocals that reach out and not only touch you. . . . but GRAB you.

(Davey) – We have been told we sound like 3 doors down, Nickelback , Pear Jam…. we are not out to copy anyone really, but we do have many influences. The SOUND of the band and the live show is really what drives us. . . . the energy that we create within each other and into the crowd is amazing. . .

I see you are working on a new album, Could tell us little about?
( James ) The new album’s tone is based on what we are seeing in the world today, brother against brother, wars, deception. I believe we are at end times, I want to tell that through music.

(Davey) – yeah that is an understatement. . . . the world is at a critical place right now and we are very interested in creating a positive message through our music so our fans. . . and EVERYONE has a common thread to grab onto.

When is the release date? Where can people pick it up at?
( James ) We are looking at a release date in Jan 2014, It will be on line in many stores like Amazon, Itunes…

Where do you get your inspiration lyrically speaking
( James ) My Inspiration comes from God, I believe God is moving in a big way through the world. What I see in Revelation, and Matt 24… is happening, so I can say It is God Inspired. I get most lyrics in pieces. I add to the song as the lyrics come to me.

What’s your ultimate direction for your band? Are you seeking fame and fortune?
( James ) I honestly can say.. This is the hardest thing I ever done in my life, I am doing this to get a message to people, that there is a God, and Jesus is the way. I am not looking for fame, I do this to glorify God. I also know God gives the desires of your heart, we just have to ask… so I desire to reach all the nations through music we play.

(Davey) – Exactly. . . . this music will make a difference. . . it had changed peoples lives already. . . and bringing people together through music to shine light and to portray Faith is our biggest goal. . . we want to reach as MANY people as possible with this music. . .

( James ) I want to reach out to the millions… billions for that matter. I am excited to see what God has planned. It is amazing how everyday is a new day. I want people to keep moving forward in whatever is on their heart to do, and discover who God is.

Do you have a favorite song that you like to play live?
( James ) As a fun song to play I love “Animal”… I tend lean more towards ” Faith ” I get a great feeling from them.

( James ) I want to thank-you for having me on this interview. and thanks to all the fans out there. We hope to see you all soon !