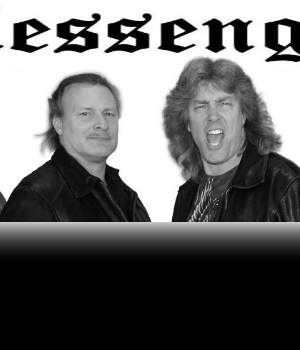 How did Messenger get its start?
I (Frank) turned to Christ in 1983 after living the sex, drugs, rock ‘n’ roll lifestyle in the club circuit in N.C.  After coming to Christ, I still loved music and God called me to write songs that represent Himself and His Kingdom to people who may have misconceptions of God. The hope is to edify but still entertain. People need to enjoy the show or it isn’t done right. One by one, through many tryouts, ups and downs, the band came together. What inspired the band’s name? When sharing Christ with an American Buddhist co-worker heavily into the meta-physical, he told me, “Frank, you and I are messengers in this world.” He was showing his resistance to the experience, but I took the moniker and ran with it. This unregenerate unbeliever was giving me respect enough to give me a title, an identity as one sent from my God.

Could you tell us about the new album “You Choose”?
We had a bunch of good reviews of our first CD, “I’m Talking To You” but we noticed some comments were repeated that we felt needed addressing. So we learned from A&R and listener feedback to grow into the sound we present in this CD. We also stayed with what was appreciated and enjoyed by listeners and hopefully we showed growth there as well. When is the release date of the CD?  October 23, 2012

How did the recording go on this album?
We did the tracking ourselves. We recorded with both Roy’s home studio and Vlad’s – which we affectionately call Studio Vovka. We would get everything done there and when we wanted Roy to do the bass guitar it was easier for him to do it at his place because of the distance. Vlad became an excellent capture engineer. A lot of tracks were done in one or very few takes. And the quality of the tracking was lauded by Paris Hollins, the producer. Any obstacles in getting this album produced? We started this record in Sept. ’11 with most of the songs already written and performed. We had some time during the Summer of ’12 that was unproductive, but we turned that around to finish the production in mid-August. Yeah, also Vlad and I were in strong disagreement about some of the newer songs, but we worked it out without headlocks & fisticuffs.

Have you had any record labels show any interest on the new CD ?
Not yet. A number of management companies have talked to us and a PR firm, but no serious label interest yet. If so, what
would you like a label to help the band with? We need public relations exposure and tour support. We believe that a label that wants to offer this kind of support will be one we would be more interested in teaming with. Some venues/festivals won’t even bother with you without label support no matter how talented and skilled you may be.

What would you like the listener to gain, or get out of, listening to ‘You Choose”?
We’d like the listener to be entertained and edified. Hard Rockers and metal heads that want their rock to rock hard and that love rock vocals and great instrument solos are our audience. We work hard to be as original as possible and rock hard to really engage listeners. We are serious and want to be taken seriously.

I see the band made the cover of the Heaven’s Metal. How did that come about?
We were running an ad campaign for the CD with HM Magazine and Doug Van Pelt and in the middle of all of what we were doing with them, a story written by Steve Rowe, a couple of full page ads and so forth, he decided to honor us with that great distinction. He has been great to us like this before by giving us a back cover on the printed version before when we hadn’t asked for it.

How has your music effected your faith?
I found out that God loves to let us ROCK!! People used to criticize loud hard rock music – and still do! You know, when music is good – it’s GOOD! It IS art and to be good at it takes effort, practice, skill and an artist’s ear and mind. Ask any truly successful rock musician.

How do fans & peers respond to first finding out you are a Christian band?
Fans get it and love it right away. Musician peers say they respect what we do because of the level of musicianship. It is humbling to find hard work and creativity rewarded with pros telling us that they like our stuff.

How do you keep up your spiritual life while on tour or on the road?
There is no replacement or shortcut for reading God’s Word and spending time on our knees in prayer. God is good all the time and His hand is not short to help us, strengthen and encourage us.

Any parting words of wisdom?
The world tries to tell us who and what we are, our families, friends, media, etc. And sometimes even we have opinions of ourselves that just are not true. And we can be dragged down into believing that we are something that we’re not and that we can’t be changed. But God has the best view of us and knows us best. We don’t have to believe those other opinions. And if we need changing, He will show us what needs changing and give us what we need to do change. Just knowing Him is supernatural.