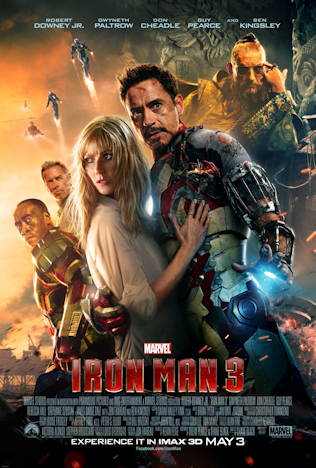 
I’ve never been a big fan of blockbusters. Mainly because of every success a sequel or spin-off is created. Generally it does not benefit the quality. Fortunately there are also successful sequels to be found, like Christopher Nolan’s Batman movies.
The First Iron Man film was a great movie. Some good action, some humor. The movie got the success that it deserved. The second part, however, left much to be desired. Iron Man 2 got nowhere near the level that it should have. The movie was mediocre at its best. Therefore i went with some reluctance to the cinema to see part three.

What stands out immediately is that the film is much more about the character of Tony Stark. The man behind the metal suit. We not only see an arogante Stark, but also a vulnerable man. This approach provides the necessary depth Part 3 definitely needed.

Also in this third movie Stark gets himself into trouble. The Mandarin, an Osama Bin Laden-like Chinese terrorist, has been responsible for some terrorist attacks on US citizens in recent months. With his last attack the personal bodyguard of Stark and Potts is one of the victims. He barely survived the attack. Stark, emotionally as he is, declared war with The Mandarin. The Terrorist strikes back immediately by bombing the Stark’s property. Stark barely escaped his house in his new test suit. In this escape the test-suit get’s heavily damaged. Stark decides to find out about the mysterious attacks. One problem however, he doesn’t have the Iron Man suit to wear. We see a Stark we have never seen before, Creative, vulnerable, but still driven to find his enemy.
Iron Man 3 is an exciting sequel in the series. The film is a good combination of action and comedy. Director Shane Black has managed to get the derailed train of Iron Man back on the tracks. I’m looking forward to the next Marvel movie already.

Yes, Lord, walking in the way of your laws, we wait for you; your name and renown are the desire of our hearts.
Isaiah 26:8

For the word of the Lord is right and true; he is faithful in all he does.
Psalm 33:4