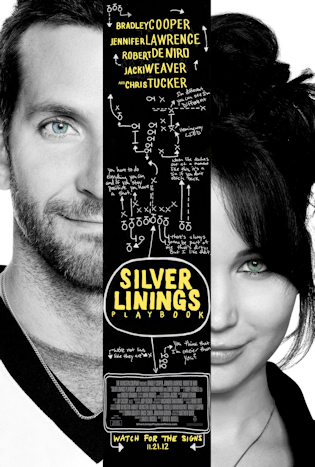 I must say, the first time I heard about this movie was only after it was nominated for eight Oscars! Silver Linings Playbook only won 1 out of 8, but it definitely got my attention, that’s for sure.

Pat (Bradley Cooper) has an undiagnosed bipolar disorder. He was sentenced to go to a psychiatric clinic for eight month after committing a violent crime against his wife’s lover. Against medical advise, Pat was discharged under a few conditions, that he lives with his parents, keeps his restraining order and will visit his therapist on weekly basis.

Pat is convinced that he can win his wife’s heart back. He runs every day to get in shape, he reads all the books that his wife Nikki made the kids read at the school where she taught and he does everything to show he’s a changed man.

When Pat meets, the equally disturbed, Tiffany at a dinner with friends, it puts his life upside down again. She wants to help him get in contact with Nikki again. However, in exchange for her help, she wants him to join a dance contest with her. It soon becomes apparent to the viewer that Tiffany is a far more suitable partner for Pat, however, he doesn’t notice because he is so obsessed with Nikki.

David O. Russell has released a pretty good movie with Silver Linings Playbook. Despite the serious theme of the film, the director has found the perfect balance between Drama and Comedy. It’s not easy to create a light film about a serious topic like bipolar disorder.

The Oscar for the Tiffany character played by Jennifer Lawrence is more than justified. However, by only giving her the credit for her performance in the film would not be right. Bradley Cooper, Robert De Niro and Jacki Weaver were all rightly nominated for their performances as well. I am glad to see Drama/Comedies like this still are being made in Hollywood.

All Scripture is God-breathed and is useful for teaching, rebuking, correcting and training in righteousness, so that the servant of God may be thoroughly equipped for every good work.
2 Timothy 3:16-17

The lions may grow weak and hungry, but those who seek the Lord lack no good thing.
Psalm 34:10