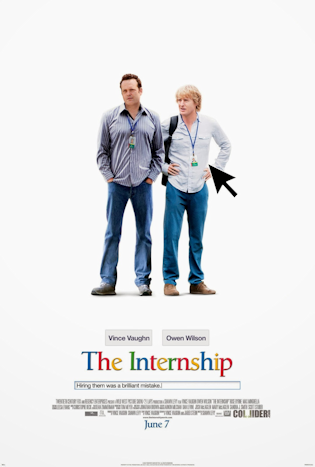 Vince Vaughn and Owen Wilson have already shown in the past that they can be a very Successful comedy duo. Their movie Wedding Crashers was above expectations actually a good comedy movie. Eight years after Wedding Crashers the two are back with The Internship. Vince Vaughn himself was also partly responsible for the writing of the script.

Billy McMahon (Vince Vaughn) and Nick Campbell (Owen Wilson) sell expensive watches, but aren’t very successful. Not that they aren’t good at their jobs, but their business has folded and has been overrun by the technology. Everyone buys their products on the internet. The two middle-aged men realize only too well that they have little chance getting a decent job without having any diplomas.

Billy decides to look beyond all of this and fills in an application form for the both of them to start as an intern at Google. After a hilarious video chat job interview, the duo actually get invited by Google. Once there, they not only need to do a week of training but also be part a tough team-challenge before they can actually qualify for their internship at Google. Only the best team will earn a place at Google. Billy and Nick end up in a group with all the misfits. With no understanding of computers, it was apparent that the two had very little to offer in the world of Google in the way of technology. Yet, it then becomes clear that the two salesman actually have something to offer with their life experience and creativity and certainly become an added value to the team.

Unfortunately The Internship isn’t nearly as good as Wedding Crashers. The movie is predictable, lacks depth and has a very flat script. The story is full of clichés. However, with all these flaws, the movie still is pretty funny and watchable. Vince Vaughn and Owen Wilson again have managed to win my heart. The two have actually saved this movie from getting much, much worse. Somehow the chemistry between the two just seems right. Unfortunately for the two, the movie is just a poor effort. Hopefully next time they have more luck.

Cast all your anxiety on him because he cares for you.
1 Peter 5:7

The integrity of the upright guides them, but the unfaithful are destroyed by their duplicity.
Proverbs 11:3