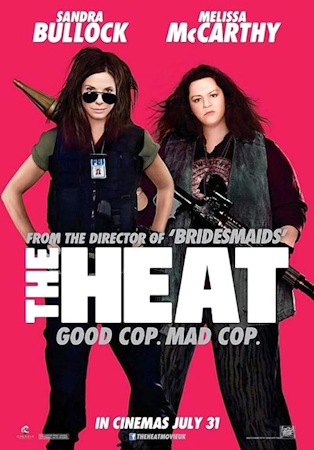 At first I was somewhat skeptical about this movie. Sandra Bullock as FBI agent in an action-comedy. Haven’t we already seen all this with Miss Congeniality 1 and 2. Fortunately this feeling disappeared within the first few minutes of the film. The Heat is a total different movie.

Sarah Ashburn (Sandra Bullock) has a reputation as a ‘by-the-book’ agent at the FBI. She works exactly according to the rules which doesn’t make her very popular at the bureau. When a senior function opens up it only seems logical for Ashburn that she should get the job. However, her boss decides to send her off to Boston to solve a case. After that the job is hers.

On her arrival in Boston, Ashburn must work with Detective Mullins (Melissa McCarthy), a coarse woman with a bad temper who often goes far beyond her jurisdiction. Yet she does her job with love and this is where both find each other. The two are such extremes in characters which causes most of the hilarity in the movie. Ashburn soon learns that you won’t catch a criminal by sticking to the rules. You need a lot of guts and you have to take a risk every now and then.

After Bridesmaides, Paul Feig once again has delivered a fine comedy. The Duo McCarthy and Bullock is perfect for this film. It comes across as if they have been acting together for years. It’s sort of a female version of Simon Pegg and Nick Frost. The Heat is the perfect combination of action and comedy, and will appeal to both male and female viewers.

My Father’s house has many rooms; if that were not so, would I have told you that I am going there to prepare a place for you?
John 14:2

So do not fear, for I am with you; do not be dismayed, for I am your God. I will strengthen you and help you; I will uphold you with my righteous right hand.
Isaiah 41:10