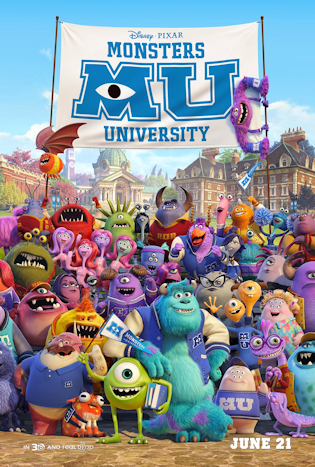 As a big fan of Pixar films, I always look forward to a new movie from the animation studio. For years Pixar has been the leader in their fields. Yet, their latest trend, doesn’t seem to be developing new characters and creativity, but rather falling back on previous films. The last few years Pixar released only one new developed movie (Brave) and two sequels. While Toy Story 3 was a great movie, Pixar clearly had an off-day with Cars 2. It could go either way with Monsters University.

We travel back in time with three characters from Monsters Inc., but we mainly follow the anti-hero; Mike Wazowski. We see how the one-eyed green ball as a child finds his calling during a school trip to the ‘Monsters Inc. Scare Factory’. Somehow the unpopular Mike manages to get out of sight from the teacher and enters the ‘Scare Floor’ and even gets himself into one of the frightened children’s rooms. From that moment he knows for sure, he wants to become the biggest ‘Scarer’ of Monstropolis.

After a jump in time we see Mike’s arrival at Monsters University, where he meets his roommate Randy, who will eventually grow into Sulley’s biggest rival. From the start, it is clear that Mike will never be a big ‘scarer’ and doesn’t belong in the ‘Scare Program’ of Monsters University. This is where we meet the character James P. Sullivan, a popular layabout with a natural talent for scaring. The nerdy Mike Wazowski and the indifferent Sulley are far different from the couple they would become in Monsters Inc. they cannot get along with each other at all, however after a plot twist they have to.

Although Monsters University in itself is a fine animation movie, I must say that it is far from attaining the level of its predecessor. Monsters University takes back earlier jokes, standard college scenes and seem to have watched Harry Potter movies on how to use games as team-building in movies. Unfortunately, my fear is confirmed and Monsters University is not the great movie i wanted it to be. Nevertheless, it is good entertainment.

Therefore confess your sins to each other and pray for each other so that you may be healed. The prayer of a righteous person is powerful and effective.
James 5:16

Greater love has no one than this: to lay down one’s life for one’s friends.
John 15:13