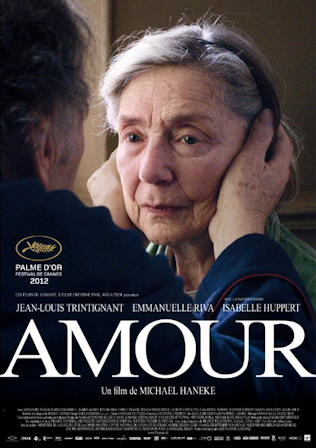 One of the festivals that I always follow with great attention the film festival in Cannes. Director Michael Haneke is always a welcome guest. A lot of his films were nominated and won awards in Cannes over the years. Das Weisse Band won the prestigious price the Palm d’Or for best film in 2009. In 2012 director Haneke won the Palm d’Or again. This time with his latest movie Amour.

Georges and Anne lead a quiet life as a retired music teachers. They live together in a nice apartment in beautiful city Paris. Music still plays an important role in their lives. They regularly go to concerts.
Their lives change dramatically when Anne suffers a stroke, her right side gets paralyzed. At Anne’s request, they decide not to take Anne to a nursing home or hospital if she deteriorates.
When Anne gets a second stroke she is rapidly deteriorating. The care for Anne gets heavier every day, yet the love between the couple is still very much alive.

Amour is a very moving film. It is not a story about a couple getting older. But it’s a story about what a major event, like a stroke, does with a human being. The entire film was shot in the apartment of the elder couple, yet it did not affect the beauty of the camera angles and lighting of the shots. Also the acting of the two main characters is of great class. With Amour director Michael Haneke again shows to be a great filmmaker.

For who is God besides the Lord? And who is the Rock except our God?
Psalm 18:31

In the beginning God created the heavens and the earth. Now the earth was formless and empty, darkness was over the surface of the deep, and the Spirit of God was hovering over the waters.
Genesis 1:1-2