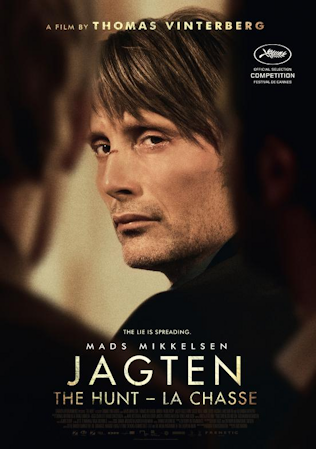 Thomas Vinterberg is no stranger to any art-house fan. He made the beautiful family drama Festen 1998, for which he won a Golden Palm. Festen was filmed according to the Dogme 95 principle, An alliance of directors which also included Lars van Trier. The movie Submarino from 2010 was also a very fine film. So when Jagten was released i knew i wanted to watch this movie.

After some setbacks Lucas seems to pick up his life again. Lucas has a close group of friends with whom he drinks regularly. He has found a new job at the local kindergarten, where he meets his new girlfriend. Also, his son who lived with is ex for some time is moving back to live with him.
His life changes dramatically when the daughter of his best friend falsely accused him of abuse. The news spreads like wildfire. The close-knit community seems to completely turn against him. Only his brother and son believe in his innocence. As hard as it is Lucas is not running away from the community he lives in.

Jagten is a beautiful story about someone who is turned down by society. The film has themes such as friendship, forgiveness, trust, prejudice and social issues. The role of Lucas is very credible played by Mads Mikkelsen. Also the acting of Thomas Bo Larsen is fantastic! Thomas Vinterberg brought us another arthouse classic with Jagten.

For I resolved to know nothing while I was with you except Jesus Christ and him crucified.
1 Corinthians 2:2