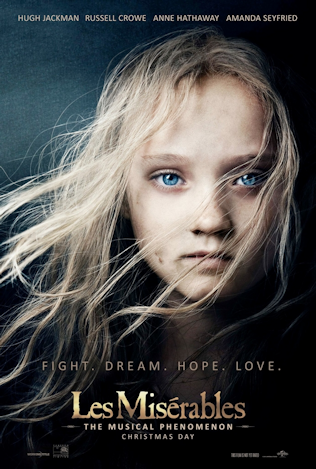 There are few stories as well known as the story of Les Miserables. The book written by Victor Hugo was first published in 1862. It is one of the best books of the 19th century. Meanwhile, there are already a number of films made ​​and it was one of the biggest and best musicals ever made. The most interesting question is what is the added value of this movie which is directed by Tom Hooper (including The King’s Speech).

The story of Jean Valjean (Hugh Jackman) begins in a Prison camp in the 19th century France. We see a group of men that ,under the watchful eye of officer Javert (Russell Crowe) pulls a ship on the banks. After Valjean is released on parole, he takes off never to return. He adopts a new name and eventually climbs up to become a factory owner and eventually Mayor of Montreuil-sur-Mer.
His life takes another turn when he decides to take care for Cosette (Amanda Seyfried) the daughter of Fantine (Anne Hatthaway).
When at one day it appears that someone has been called Jean Valjean is arrested, he decided to show his true identity. This however means he needs to flee again for Javert.
We jump a bit in time until we end up in the French revolution.

“Fight. Dream. Hope. Love.” is displayed on the movie poster. I can’t think of a better summary for this wonderful story. We see beautiful sceneries of 19th century France. It’s a well adapted screenplay. Tom Hooper however has taken a risk by singing almost every dialogue in the movie. Because of that it isn’t a very accessible movie. The vocal qualities of Hugh Jackman and Anne Hathaway are beautiful. Only Russell Crowe seems to have a bit trouble with the singing in some scenes. Luckily this does not affect the quality of this movie. Les Miserables still is a wonderful story.

Fathers, do not exasperate your children; instead, bring them up in the training and instruction of the Lord.
Ephesians 6:4

Blessed are those who are persecuted because of righteousness, for theirs is the kingdom of heaven.
Matthew 5:10